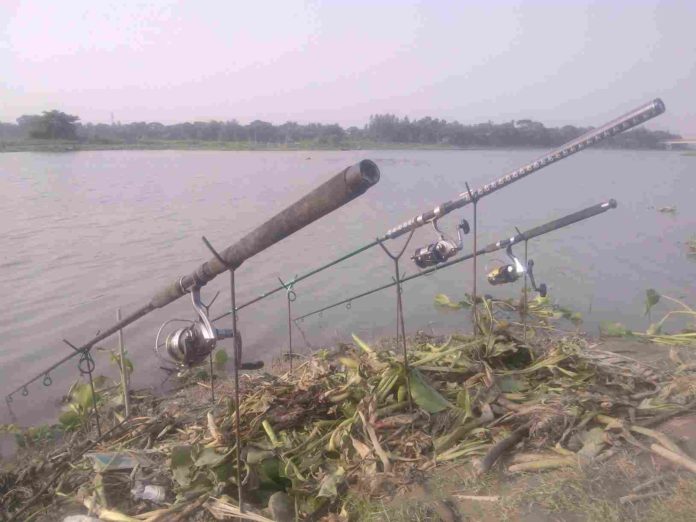 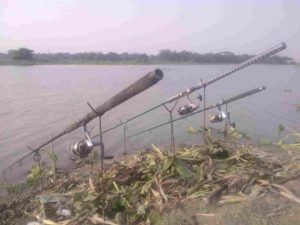 On October 30, 2011 I went to try my luck to Lankar Char, just opposite to the Hemayetpur Tannery Project. The day was superb hot. Humidity was tremendously high. Over that there was a 3 KM walk to the location with the hot sun over head. The water level of Banghshi  river still was very high. Anyways, all the effort ended with a broken line after waiting the whole day under the burning sun. I don’t know if it was a fish or something else. I just saw something suddenly took my bait and pulled the line drastically with serious strength and went inside the nearby bush. It stuck my line with underwater branches. After a fruitless try for pulling the line back, it simply broke. Thus ended the first Bangshi Expedition of this season. 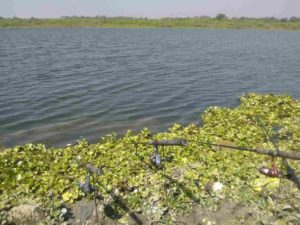 On October 12, 2011 a man caught 5 boals from Roopnagar, opposite side of Savar Bazaar. There were news coming from here and there about catching boals (Wallago Attu) from Bangshi river. In fact, the season of catching boals has just started. The angling season in Bangladesh generally starts in October until the downfall starts in April/May. Anyways, a man caught another 2 boals the next day. Without thinking I took decision that I would go fishing the very next day which was yesterday. I took my preparation with great enthusiasm.

Only those who hunt for boals can tell how painful it is to do things workable for boals. Nothing bothers me except the stinky, half rotten minnows which require to be boneless before putting on hooks. At 7:30 PM I went to my location. It was just beside a fishermen s village. A great location for boals. Last year about 40 fishes were caught from this very location. I also caught 1 from here last season. Anyways, at around 8:00 pm I set three lines. At this stage there is nothing actually to do but calling God.

Soon mosquitoes found me with great pleasure and started to make the best use of me. The clock stroke  10:30, but there was still no trace of fish. Instead I was observing that the current was getting stronger. At 11:30 I changed the baits and wait there until 2:00 AM. At this point I decided to change my location and moved to 500 yards away in another location. After setting the lines I had been  I became a little upset as well as disappointed for my fruitless(actually ‘fishless’) start of Bangshi Expedition. But don’t worry, this expedition  will be carried on until we get an exclusive story to tell.

One thought on “Bangshi Expedition – Another Fishless Day”