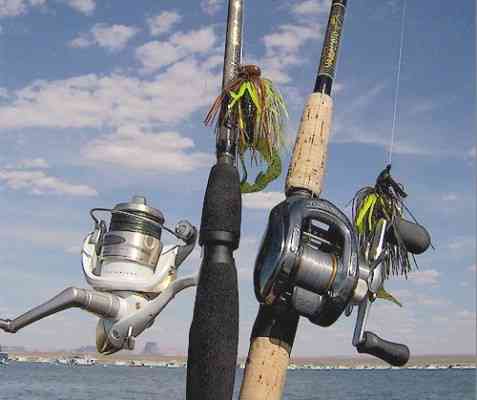 In angling world Carp fishing is considered as one of the stratum where anglers can use their merits and innovative ideas. Likewise in different parts of the world carp fishing has gained much popularity in the recent years in Bangladesh. The fervor of Angling among the different sects of people has been flourishing in a decent manner. But problem lies with the newcomers when they enter in this arena. As angling in Bangladesh is mostly carp dependent, the newcomer anglers face different kinds of problems in choosing the right tackle with which they go for angling. Side by side not only the newcomers but also some senior anglers are found not to use the right tackle for the right species. This article is about choosing the right carp fishing tackles (Rod and Reel) for the right species.

I am starting my discussion with the fishing rod and this is the basic element for angling. The primary question that rises among the newcomers is, “what kind of rod I should use?” or “which rod should serve my purpose?” This raises two very basic questions among the newcomers and the novice anglers. Those are given below:

Length of the Rod & Casting Weight:

As this article is focused on the available tackles found in the local marketplace for carps in freshwater, whether it`s river or lake or even a pond, the angler should go for a rod that lengths up to 9 feet or 10 feet. Again, in regard to rod action, the angler should keep in mind what kind of species he is going after. A common problem has been found among the anglers in Bangladesh when they are asked- “what is line capacity of the rod?” or “what is the casting weight of the rod?” They simply can`t answer the questions. Here I am going to show a calculation which might help the new anglers to choose the right rods.

Now from the above calculations, let’s consider a rod where it`s written on it, “the capacity of the rod is 120 gm casting weight (whether lure or bait or it also may be written 2-4 ounce), this means the rod has the ability of casting 120gm of weight. Now, come to the point of line capacity. If on a rod it`s written- “The line capacity of the rod is 15-30lbs” means that breaking strengththe of the line moving through the guides of the rod should be between 15lbs(6.8kg) and 30lbs(13.6kg). The matter of the length of a rod depends on the personal preference of the angler. But to me, I find 2702 milimeters or 9 feet and 3002 milimeters or 10 feet rods quite pleasuring. In case of river fishing, if the angler has a boat then he can use 7 feet or 8 feet rods. Angling Competitions are very popular among the Bangladeshi anglers. They are found to use large baits (Laddus) in these competitions. So in this regard longer rod is very much necessary to serve their purpose and here I would like to say 9 feet or 10 feet rods serve just fine. Even if an angler wishes to go for angling in the river and if he places himself at the river bank then he should use a longer rod.

Another Important feature which I want to discuss is the action of the rod. ‘Rod Action’ is very important. Because, to fight with a big fish whether in a lake, a pond or a river the angler should have to be concerned about it. I have classified the rods into three categories based on the rod action and availability in Bangladesh. These are:

Because of the portability both the telescopic and two-parts rods are frequently used by the angling community of Bangladesh. Again in case of rod material both carbon graphite and glass fiber rods are popular in Bangladesh. Because of difference in rod construction materials, graphite rods are tend to be more priced than the glass fiber ones. Different brands of rods are available in Bangladesh. Among the rods Daiwa, Telepartner, Silstar, Kingfisher, Tica, Pioneer etc are the notable ones. All of these brands of fishing rod have been proved themselves quite satisfactory while fighting with larger and smaller varieties of fish, especially the carps.

After rod the second and undeniable segment of tackle is reel. To assist a good rod the role of a good reel is unquestionable. There is a common saying in Bangladesh “The more your add sugar in tea, the more it will be sweeter”. However, the performance of a good reel depends on lucrative prices. But the article is all about the tackles which would serve you and help you to choose your tackle. One thing that I would like to add here is the application of minimum input in regards to tackle prices and expectation of maximum output in regards to service of the tackle and mostly in angling. Now before purchasing a reel what are the key points which we should consider are cited below:

Spinning Reel and Baitcasting Reel: Spinning reels have been well accepted by the anglers of Bangladesh both in the saltwater and freshwater. On contrary to spinning reels, baitcasting reels haven`t achieved that popularity among the anglers like the other parts of the world. The reason that I can say is the maneuverability. Another reason may be the structural pattern of the baitcasting reels. Well, this is not an established thought and the actual cause may be the anglers of this country were introduced by spinning reels before that of baitcasting reels. Other than these reasons, another important reason is that, a spinning reel can be fixed or repaired easily in context to a baitcasting reel. The notable brands of the reels which have flourished in the tackle shops are Tica, Pioneer, Daiwa, Shimano, and Shakespeare. Another important thing is that, except Tica and Pioneer, other mentioned brands are of higher priced. Nowadays, different brands of spinning reels are being imported by the local importers, which are comparatively cheap and serving the purpose of whether seasonal or amateur anglers.

Drag System and Drag Pressure: The drag system plays the most important part in any reel. The second most important feature that comes right after the Drag System is the Drag Pressure. Yes obviously more or less all anglers know these features, whether it`s a spinning or a baitcasting reel. In a free spool reel there are two drag systems (Primary and secondary and applicable to both saltwater and freshwater fishing). On the other hand both spinning and baitcasting reels have their own style of drag systems. Both front and rear drag spinning reels have been found to be commonly used in Bangladesh. Front drag and rear drag will be discussed in the later point. Now the Drag pressure which is to my opinion has a greater role to play. The drag systems of the reels that we commonly find in our local markets are mostly limited within 6-12lbs depending on the price points. Because of the lower drag pressures sometimes the anglers have to have patience for a longer period of time to fight back larger or even a medium sized fish or even sometimes they lose a fish.

Front Drag or Rear Drag System: The common and a very important question revolves around the mind of a newcomer angler and often they ask- “which drag system (front or rear) should I go for?” My opinion in this instance is simple and that is, “it`s your choice”. But if anyone asks me the same question, my answer will be simple, I would go for a front drag system reel and I have my reasons. These are as follows:

Gear Ratios in a Reel

Reels can be divided into two categories on the basis of gear ratios. These are:

In tackle shops reels of variety of sizes are found to be purchased by the anglers depending on their needs. Some anglers do prefer large reels and some prefer medium and the rest are seen to use small reels. In Bangladesh 4000 and 5000 series reels are quite popular. For example, these reels can hold on an average of 230 yards of 12lb line with a diameter of .30 mm lines, 14lb of 220 yards of line with a diameter of .32 mm (on a 4000 sized reel). Depending on the spool size these calculations can differ. My point is, before purchasing a reel it will be very wise to read the brochure, which will help the purchaser to understand what he is going to need. A very important point that I would like to mention is that, the bigger is the reel the more line it can hold and side by side it will gain more weight. Big size reels have an advantage for long casting whether in surf fishing in saltwater or from a river bank and these reels have greater drag power. Another feature that I recommend in reels is the amount of bearings. The reels that possess more ball bearings give better performance during maneuvering. Again for float fishing it`s better to use lighter action reels and rods.

All the discussion as already I have discussed earlier tend to converge at a single point and that is the budget. Budget is the most important and undeniable factor in this regard. Before purchasing the mentioned tackles (Rod and Reel) it will be wise to take a look around the market and setting up the mind. Ask yourself, what I would like to purchase and which tackle will serve my purpose. For an angler the first and foremost thing is to know the tackle he is going to use. To me angling is an art and to make a masterpiece art you have to use the right tools. Simultaneously it`s not about casting at far distances rather about picking up the spot and catching fish. In next article a vivid discussion will be carried upon lines, floaters, terminal tackles, hooks. Hope you have enjoyed the discussion. Tight lines and crying reels…

FISHING WITH FRIENDS IN AIB VENUE

Wallago Attu (Boal Fish): A Dreamcatch to Every Bangladeshi Angler