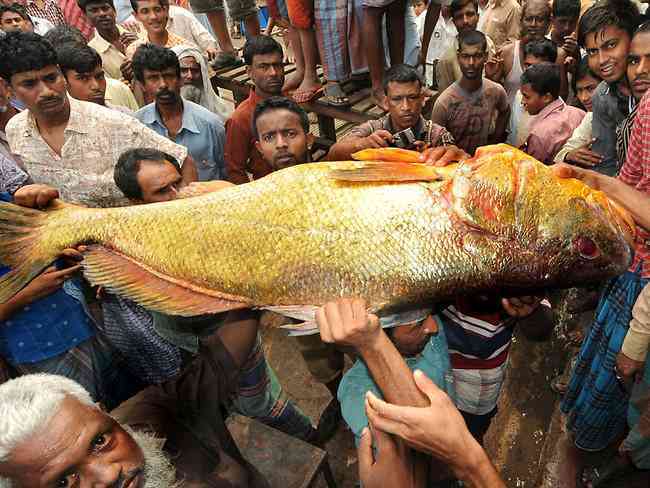 Here are the pictures of some monster fishes that were caught in Bangladesh in the past few years. These pictures came in different national newspapers in different times. We have tried to give the original sources of the photo for authenticity.

This 240 KG Baghair was caught in January 2008 from Kushiyara river and was brought in a traditional fish fair at Sherpur in Moulvibazar. It was sold in Taka 90,000. Net was used to catch this monster. Click here for more details.

Maybe this is a world record. The biggest Clown Knife-fish ever been caught in our acquaintance. This beautiful fish was hooked from the mighty Jamuna river by an angler named Milan at Hard Point dam near Sirajgonj in late 2010. It weighted 14 KG and 400 grams and 4 feet 2 inches in length. The angler sold the fish in Taka 10,000.

Unfortuntely this is not a world record. This black carp uas hooked from Jessore Municipality pond in Janury 2011 by a local angler named Litu. This fish was 55 KG in weight and in length it was 5 feet and 2 inches. Source here.

This Baghair was 105 KG in weight. It uas caught from the Jamuna river with net in May 2009. It was brought in Capital Dhaka and got huge media coverage. This is reported to be the second largest fishes of this species. Click here for source.

This 38 KG rare golden snapper was netted in the Bay of Bengal in April this year. It was brought in Chittagong city and was sold to a Chinese businessman in a fair price of US$36,900. This fish got a huge coverage both in national and international media.

This 420 KG grouper was also netted from the Bay of Bengal in June 2011. Imagine what would happen if you hook one of this.

A Beginner’s Guide to Fishing Reels

The Basics of Carp Additives and Stimulants

Awesome Catch with Bottle and Line